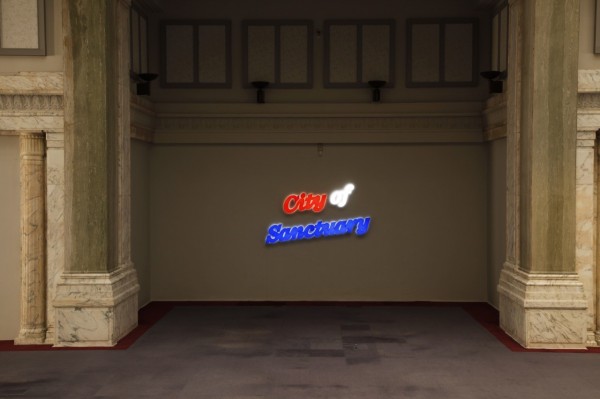 The theme of Liverpool’s 2012 Biennial International Arts Festival was Hospitality.

Working with Artist and Activist Andrea Bowers, local designer Sam Wiehl, and the Liverpool Biennial of Contemporary Art, Liverpool city of Sanctuary was able to claim its own space in the Cunard building, a historic point of entry to the city, as well as establish a visual identity for the campaign in its early stages.

This collaboration included a unique installation, at the Cunard Building from the 15th September – 25th November.

The Liverpool Biennial’s theme this year of The Unexpected Guest offers a unique opportunity to reflect on the values of hospitality, and the act of welcoming a person into one’s home. Liverpool has for generations offered a home to people fleeing persecution from around the world. People seeking sanctuary have lost their homes and families; yet they have a lot to offer (different traditions, skills and expertise) and can unquestionably contribute to the development and culture of Liverpool.

The City of Sanctuary movement, in its initial stages in Liverpool, provides a simple concept and common banner of awareness, uniting those already working to support asylum seekers and refugees, and providing a simple platform for others to do the same. At this early stage the movement is looking for individuals and organisations across the city and civil society to first of all pledge their support. The movement, currently consisting of an informal group of civil organisations, will provide the ideas, contacts and help to then turn such support into practical action. We are striving to spread a culture of hospitality and support throughout the city

Asylum seekers in Britain receive £35 in basic support per week, are legally prohibited from work, and are subject to relocation or detention at any point during their asylum claim. With no country to return to, this in-between form of life can take years to be decided by the Home Office. Many suffer from mental illness or depression during their time in Britain, and destitution is common.

For people to live together in a safe and sustainable community, all members of that community must have a basic appreciation and understanding of the people with whom they share their lives. Asylum Seekers and Refugees, who may have experienced multiple traumas, cultural and geographical dislocation, language barriers and a wide range of other disadvantages, need the support and understanding of the host community, as they begin to make sense of their lives in their new surroundings. The host community need to feel safe and confident that the arrival of newcomers in their neighbourhood will not somehow sweep away their former values and way of life. People need to learn to appreciate one another. 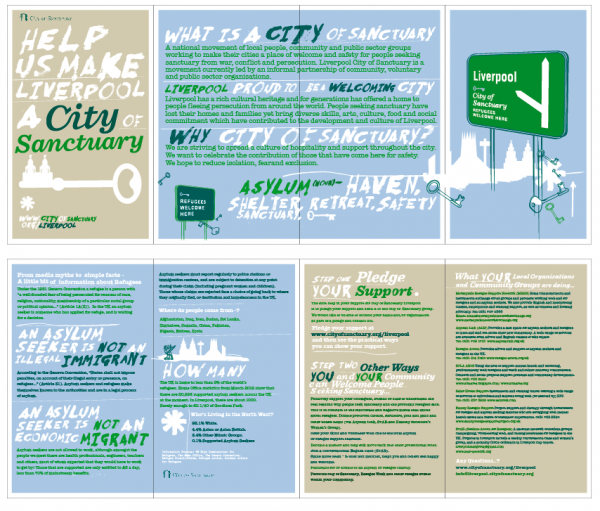 For information on the 2012 Liverpool Biennial:
www.biennial.com